Today we attended the first annual FIRST Festival of Champions in Manchester NH. It was an awesome event.

The winning alliances from both Houston and St Louis were preparing together to perform as well as possible. The FTC Alliance from Houston captained by team 724 Redneck Robotics, team 4216 Rise of Hephaestus, and team 8651 Wait For It worked together to hone their strategy, especially in autonomous. Redneck and Rise of Hephaestus worked out their autonomouses to feed particles to score again. The St Louis Alliance captained by 8686 Height Differential, 6929 Data Force, and 5916 BoBots had cool robots. All three teams had a colour of Orange and so they called themselves the Orange alliance, they even had special shirts made up.

The matches were very exciting. Ultimately the Houston Alliance won it in four matches.

FRC was also happening at the same time. There were some very exciting games. Houston won the first two matches but then St Louis returned to win three in a row ultimately taking it with world record score of 588.

We also got a chance to meet the Combustible Lemons the team that won the Inspire Award in St Louis. 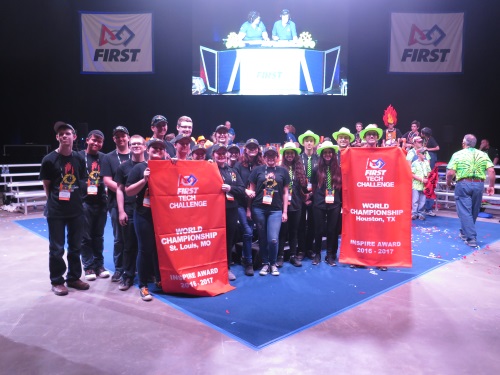