BC students (Grades 1-12) are invited to celebrate all things science, technology, engineering, and math with Engineers and Geoscientists of BC by taking part in the STEM Leaders of the Future: Engineering and Geoscience contest!

Check out the list of challenges to help get those creative thoughts flowing. Using items you can find around the house, students are encouraged to create something brand new that solves one of today’s big issues.

Here are the basics of the contest:

Our team spends a lot of time working on robots, but in the summer, we like to try some different types of projects too.

As a fun, design challenge we decided we wanted to do a paper airplane competition, with a twist – we would also have to build separate launching devices to launch the planes instead of throwing them. We ended up using 3 different forms of potential energy. Our first team used elastic potential energy pulled back into a Tetrix based launch to launch their plane. Our second team used air pressure by making a closed-air system which launched a plane by pushing down on a soda bottle. Our final team used chemical potential energy from the reaction of Coca Cola™ and baking soda to launch a rocket-shaped plane.

We had a lot of fun planning our strategies for the competition and painstakingly assembling our planes and the launcher. Our elastic plane launcher ended up taking the prize for the most accurate, landing in the nearest target hoop twice, and in the farthest hoop once. The plane that launched with air pressure wasn’t too accurate, but it managed to land in the near hoop once (unfortunately the soda bottle broke immediately after the first accurate launch).  When you shoot for a moonshot you take a lot of risks and unfortunately the third plane was unable to launch, though we were treated to a pretty snazzy show of explosions.

At the end of the day, we had fun, learned lots, cooperated and had a pretty cool air show!

It was great seeing all the teams at the Washington State Championships. Technova’s autonomous program was amazing, even if it had a few difficulties. We liked Perpetual Velocity’s fun team introductions, Bearded Pineapples had a great slideshow with CAD and of course, Safety Steve.

We like this year’s game since Alliances really have to work together to score the most points. Lots of teams were working with their Alliance Partners on the practice fields which was fun to watch.

Our robot had good matches (successful autonomous, stacking and end game points) and challenges (dragging a tape measure around the field during tele-op).

14179 Sushi Squad (2nd Alliance Captain) choose 12611 TechNova and FIX IT for their alliance partners. Unfortunately, we lost out in the semi-finals.

FIX IT was very excited to win the Inspire Award and qualify for the Houston Championships!

In spite of some weather challenges, FIX IT was able to go to Interleague but one of our team members missed the ferry. We were very exited to see the Washington State Teams who weren’t in our league.

FIX IT worked well with their partners and were ranked 1st at the end of the Qualifying Rounds.  We chose 12611 TechNova and 6541 Titan Robotics II, which was a great alliance with all the teams and robots working well together.  It was very exciting to win the final match and be the Captain of the Winning Alliance.

Our team members were surprised and delighted to be nominated for the design award and win the Control Award.  Best of all, we’re going to the Washington State Championships on Jan. 26, 2020.

Rather than waiting for FIRST to create a Water Game, FIX IT decided to go looking for their own Water Game!

The 34th Annual Slegg Building Material Build-a-Boat Competition was on July 1st, Canada Day, in Sydney, British Columbia. Teams (must have three people) have a maximum of $115 worth of materials donated by Slegg Building Materials to build their boat. We entered with two teams; FIX IT with Joel, Mythri and Duncan ( FIX IT alumni) and Water Game with Ines, Bijou and Linday (a friend).

We had 4 hours to build our boats from the materials.  Both boats came together fairly quickly, even though they were very different designs.  The real question was ‘had we used enough caulk and duct tape to make them water tight?’

It was an exciting opportunity, and a chance to try our carpentry skills which turned out to be a challenge.  But both boats were finished in the four hours allowed.

There were about 10 boats in the race around Sydney harbour.  Fortunately, Search and Rescue were onsite, which turned out to be a good thing when one of the other crews needed rescuing.

One of the FIX IT team boats launched well, and completed the course.  The other boat, named Caulk Monster, had some launching issues. The team  was pretty happy to have their boat float, though it wasn’t hydrodynamic and it didn’t go very far.  It was water tight until they tipped and let the water in over the sides.

Bijou and Ines decided to have some fun and went for a swim so they could escort the other FIX IT boat as it crossed the finish line.

Everyone had a great time and learned something about boat building. Our coach hoped that it would end the Water Game talk, but we may just try it again next summer!

Rainhouse sponsors the FIX IT Team and many of the Engineering Clubs at the University of Victoria.    We’re all invited to enter this friendly competition to showcase our innovations on June 21, 2019.

This year, FIX IT set-up a full FIRST Tech Challenge playing field, and extra robots so the crowd could all get the opportunity to drive robots.  There were lots of employees from tech companies, but also everyone from small kids to seniors. Everyone had a lot of fun, it was a really cool volunteering event.

We met some VIPs like the Dean of Engineering from the University of Victoria.  He was interested in our robot and our future plans.

The FIX IT Robotics Team will be one of 34 teams competing today, March 17 at the Championship Event in Seattle Washington.

Opening Ceremonies is at 11am, with robot matches played all afternoon. If they are on time, final awards starts at 5:30pm.

There’s usually a live feed from the competition, but I don’t have the link yet. It should be posted on the FIRST Washington Website.
Live feed link: http://twitch.tv/firstwa_blue1

Ines has been enthusiastic about FIRST for many years. She joined FTC 3491 FIX IT in 2017/18 and was on the St. Margaret’s FIRST LEGO League team for two years before that. END_OF_DOCUMENT_TOKEN_TO_BE_REPLACED

FIX IT competed in the Pasteur Interleague event in Washington State on Dec. 15, 2018.

We started the day by setting up our pit. We were excited and ready to go. We then had time to practice our interview a few times before getting queued for our judging interview. It was little scary, especially for our new team members but we did pretty well. Even though there were a few hiccups, everyone was confident and we made it though alive!

We had a lot of fun at Interleague! Some of the highlights were:

It was very exciting to be chosen for an alliance in the Elimination Rounds. Unfortunately, we lost out in the first round, but just being chosen added to the excitement of the day.

After a long and eventful Interleague, it was time for Closing Ceremonies. We won Motivate and 2nd Inspire and qualified for the Washington State Championships! You will see us there!! 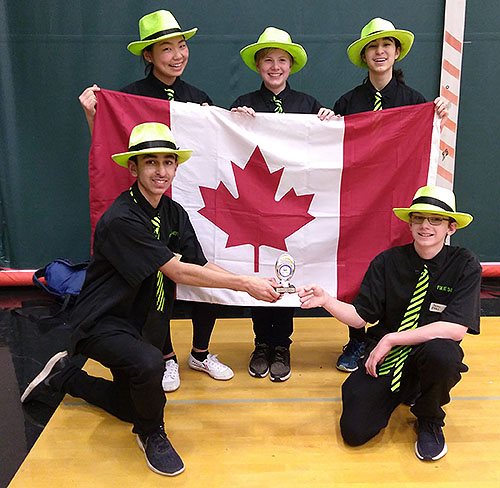 When we finally got to MIT, we were given the final track. It was huge
and took up an entire ice rink!

The race course required all the skills we built throughout the summer, having many components needing open CV, and we decided to use ROS to connect and create nodes, notably our safety controller. The course had lots of challenges which testing our programming to the limits! END_OF_DOCUMENT_TOKEN_TO_BE_REPLACED