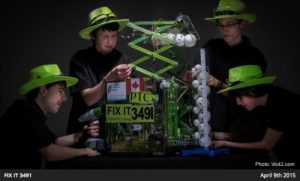 Larry the Lizard picks up balls with his tail (the “box stomper”) and spits them out of his mouth (the scoring trough). He has an extendable neck (the scissor lift), long arm for the little ball ( auto arm ) and a small front paw (the “hook” ) to hold a rolling goal in place. Larry has sticky feet (6 wheels) and can move quickly (powered by 4 DC motors). He uses enhanced vision (IR, EOPD and ultrasonic sensors) so that he can find his way around the playing field.

Larry has two autonomous programs. From the parking lot, Larry uses the IR sensor and encoders to find the center structure and score. From the ramp, Larry uses his Ultrasonic sensors to line parallel to the wall, then scores in the medium and tall goals before taking them to the parking lot. If the goals were moved before he gets there, he uses the EOPD to verify there’s a goal before dropping balls and going to the parking. 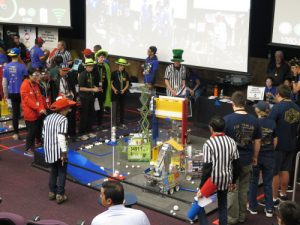 We were quarter-finalists in Australia—ranked 9th out of 32 overall—and won the Think Award for the “Team that best reflects the journey the team took as they experienced the engineering design process during the build season”.
A fantastic end to a fantastic season. Special thanks to Jack and our friends and sponsors in Seattle and Victoria for their support. Now time for some sightseeing! 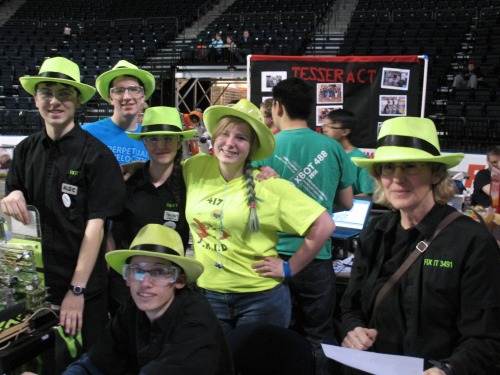 The Washington State FTC Championships were held at the ShoWare Center.  Thank you to the City of Kent for donating the space.  It was an amazing venue for the State Championships!
Only three of our team members were able to be at this event, so we “adopted” some team members from Swerve Robotics.  Thanks to Katie (FTC 417) and Jack (FTC 8923) for helping so much
At the end of our long, exciting, day, Team 3491 was part of  Winning Alliance, won the Connect Award and had qualified for the Super Regional in California.
Thanks to Washington State for hosting a great event, and for the live feed of the whole tournament. 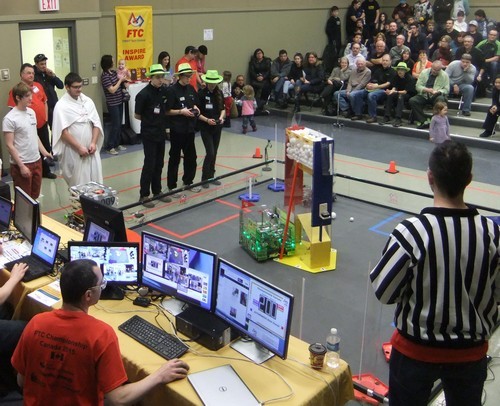 The Canadian FTC Championships were held in Edmonton on Feb. 8, 2015. We had been looking forward to playing with Canadian teams at an event. Our first couple of matches went well, but our autonomous program was blocked. Then came the perfect match. We scored both balls in the centre goal in autonomous and then knocked out the kickstand. It was great to see that all the testing on Saturday paid off.
By the end of the qualifying rounds, we had a perfect record (no losses) and were the top ranked team. We invited 5009 Helios, the second ranked team to our alliance, and they accepted.
The first match of the finals was our high score for the day, 493 points. After winning the second match of the finals, we were Captain of the Winning Alliance, received the Rockwell Collins Innovate Award and had qualified for the FTC World Championship in St. Louis! 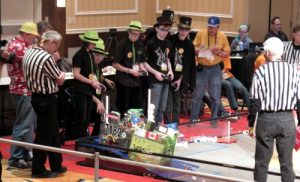 World’s was an exciting event, especially for some of the team members, as it was their first time being there. The judging interview went well; the judges were very interested in how Larry worked. After Larry magically fit inside the sizing cube, we began playing matches. We lost a few matches but Larry performed admirably! We were up against some tough robots: in one match, we lost with 694 points!

We didn’t get picked for an alliance but just watch the finals was plenty of fun. Larry is a good robot but I’m fairly sure that we couldn’t have held our own against the finalists. Thanks to FIRST for creating challenging and fun game!