Today we started our day with a nice breakfast at a cafe near the FIRST headquarters. From there we drove to a power plant called Amoskeag Hydroelectric Station. In addition to the historic plant, there was a visitors centre and nature house, where we saw several local species on display and learned about local ecological concerns. There also was a fun interactive 3D display that used an ultrasonic sensor to project a map on sand which would change depending on how high the sand was moulded.

Next, we had a short tour of Dean’s company Deka, where a manager explained some of the displays in their lobby including the Segway!  We then moved out the parking lot where a Deka Engineer, demonstrated a new kind of wheel chair called the iBot. This wheel chair had several different angle measuring sensors; these helped it to drive over all sorts of terrain including stairs, raise and lower the user, and keep the wheels on the centre of gravity. 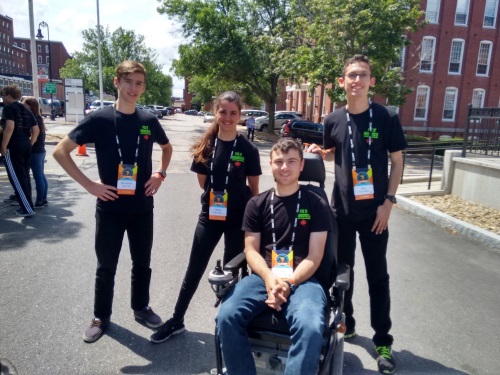 After that, we had lunch and then choose to go to the SEE Science Museum beside the FIRST headquarters. This museum claims that it houses the largest permanent Lego display in the world, which we found super interesting. Other than the Lego display, the science museum had many interesting interactive exhibits which we had a lot of fun using as well.

Right beside the science centre was a museum on the history of the cotton mills in Amoskeg, Manchester, New Hampshire which was the largest textile producer in the world when it was running.

The Houston teams that are competing at this event had their practice session on the competition field in the afternoon and we were invited to come watch. We had several good discussions with them and enjoyed seeing the robots in action.

Tomorrow will be the final competition of the season and we are all hoping to have restful evening tonight before the big day. Check out the live stream between 7:30 – 9:30 AM P.S.T. through a link on this website or through FIRST’s website.