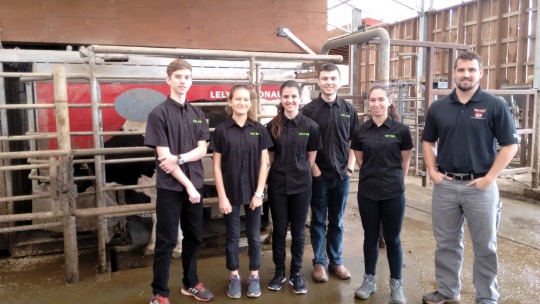 Today, we went with WestCoast Robotics — official dealers of Lely North America — to see how robotics helps reduce labour requirements and increase production on a dairy farm. In this case, Van Valley Farms. 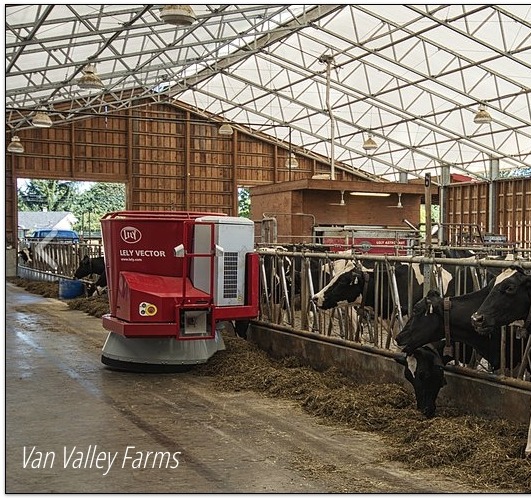 The first robot was a feeding robot (a Lely Vector Automatic Feeding System). It mixed the feed to the right proportion and the autonomously distributed and mixed the feed.  It mixed the least accurate in mixing first so that the overall mixture was correct. It used force sensors to determine how much food it had picked up. There was an industrial claw that picked up the hay. Once the mix was correct, the robot would navigate along the feed trough, and use a laser rangefinder to measure the height of the feed. The feed would be replenished up to its standard height of 22mm if there was less—this prevents food from being wasted. In addition to LIDAR, there were ultrasonic sensors used to measure the robot’s distance from the wall. The robot goes out every half hour, ensuring there is constant food for the cows all day and all night.

The milking robot (the Leyl Astonaut A4) has a pen for the cow to stand in. Once the cow is inside, the robot cleans the udder with a set of spinning brushes, the uses a laser to find the position of each individual teat, and attaches a suction cup to it. It uses a vacuum and pneumatic pump to squeeze the teat and extract the milk. Once the milk is pumped out it went into a tub where it is tested for blood or discoloration to ensure quality and safety. The cows enter whenever they feel like it, but if the cow has been milked too recently, the robot won’t milk it. There is a special treat given to the cows who come to be milked. It was interesting how readily the cows can be trained to adapt to the new system. The milker used a three axis pneumatic position system. It was also calibrated to provide give, in case of an unexpected cow movement, to prevent the cow from harm. It was also capable of moving with the cow if the cow walked back and forth.

There was also a complex data collection system. Every cow had a datalogger and transponder: this kept track of when the cow had been milked as well as its medical history and concerns. The robot would do a basic check of the udder and phone the farmer if there was an issue. This allows the milker to customize its milking routine to each cow, helping even more with productivity. This can be helpful, for example, to determine if a cow only has three teats instead of four—so the robot doesn’t try and milk a fourth teat.

The robots were extremely impressive. Thanks to Roscoe and Ben the farmer for letting us come have a look!