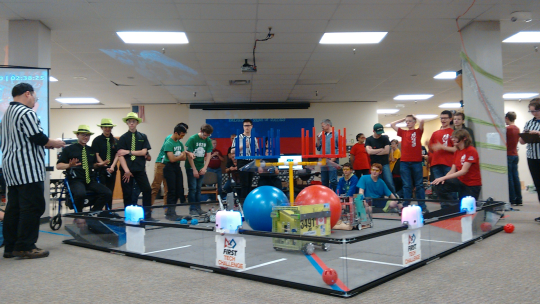 We traveled down to Arlington for League 1. There were 13 teams (including us) for this season’s inaugural event.

We won all six matches and ended up with 77 ranking points, and we placed first overall! While autonomous didn’t succeed for most of the matches, it did press both beacons once and performed well during tele-op.

In the last five matches, we managed to claim all four beacons by the end of the match! Even in matches where the beacons were hotly contested by both red and blue, we managed to claim them all in the end (thanks to some very impressive driving by Helen and Ben). Strangely, the foam on the side of the robot didn’t seem to effectively push the beacon buttons.

We had a lot of fun and would like to thank Team 9330—the Neobots, for hosting Knuth League again this year.