All teams were asked to get to the event early, because the Vice-Premier of China was going to be there.  Larry was one of four robots asked to play a demonstration match for the Vice-Premier.

Then it was time for the elimination matches.  The Bears were captain of the first alliance, with The Baconeers from Australia as their partner.  It turned out that some members of Cougar Robotics were here with an FRC team from Australia.  They had brought their FTC bot too, and loaned it to The Bears.  Here’s a picture of the Bears with the Cougar bot. 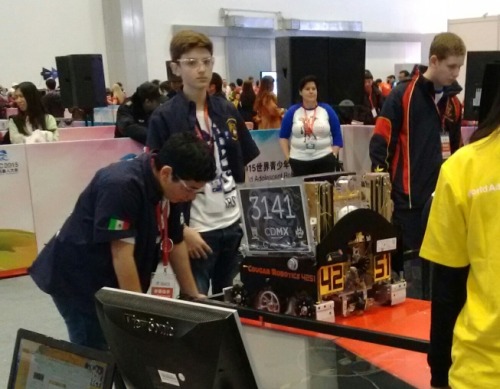 Many teams were having trouble getting the new technology to work reliably, plus there were a few bots running on NXTs that weren’t having any problems.  In the interest of fairness, the teams and organizers found a creative solution.

All matches were run in two parts.  First, the teams would run autonomous matches only to get a score for autonomous.  Then the teams would play three tele-op matches.  Since most of the problems were happening between autonomous and tele-op, this solution gave the teams using the ZTE phones at least a chance to run during matches. 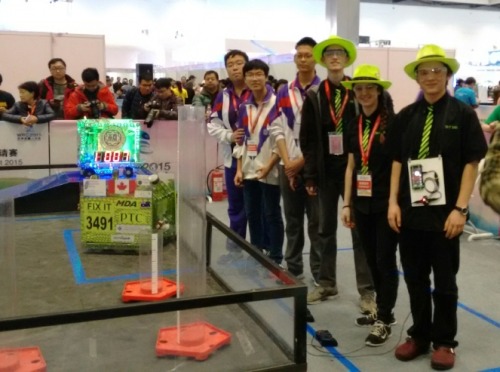 The organizers were great about giving teams time to get their robots working between matches.  And yes, that’s Joey from Cougar Robotics with the coach of the Bears, on the field fixing his bot during the final matches. 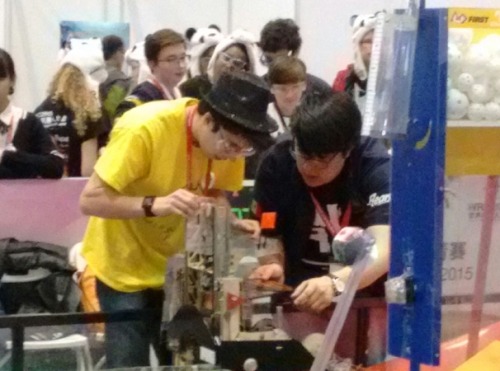 FIX IT was very excited to make it to the final matches.  Larry did great at scoring in the centre goal, but it wasn’t enough to win the last game.  The Bears and the Baconeers won!

Here’s a picture of our team with their trophy: 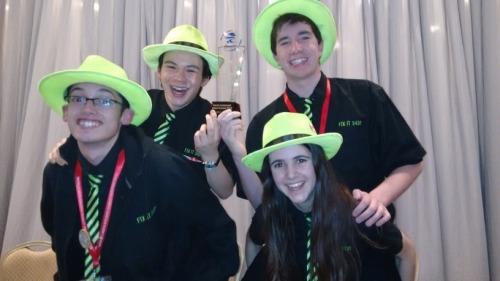 After the Award Ceremony we were taken to a TV studio where they taped an hour-long show about FTC and FRC.  They started by running an FTC game and Larry got to play his final match, once again, filling the centre goal and winning the match!

It was a great way to end Larry’s last game.