Sunday was a lot of fun, and a very typical FIRST day. Our morning in Beijing started by meeting with a Grade 8 student in Beijing who will be attending a Victoria high school next fall for Grade 9. He’s interested in joining the FIX IT team.

Then we had a bit of free time, so every thought a snow ball fight was a good way to spend the morning.  If you look carefully on the right hand side of the picture, you’ll see a bit of the Bird’s Nest stadium in the picture.  We are staying just beside the Olympic village. 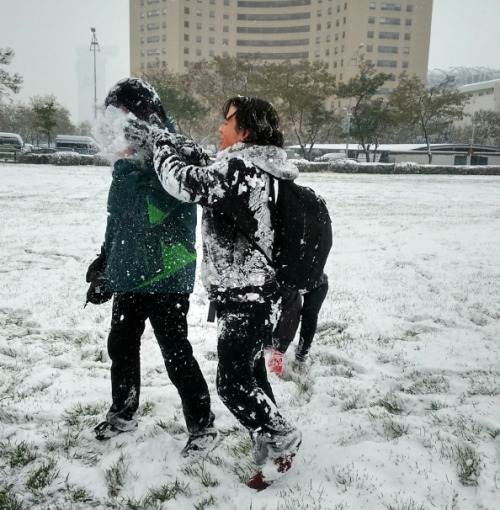 After lunch, we headed to the venue where the World Robot Conference will start on Monday.  Our contest is part of the event.  There are 6 international teams and 6 Chinese teams at the event.

We were able to run some practice matches and get our pit are set up.  Then we headed back to the hotel for a Coaches Meeting and Friendship night with all the teams. 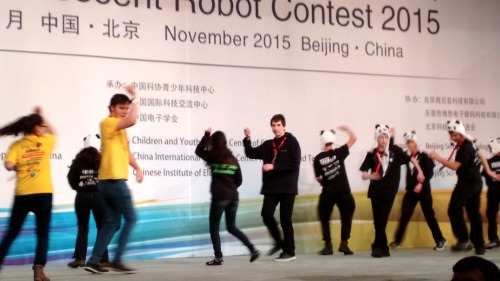 At this point, we found out that another team, the Bears from Mexico, hadn’t seen their robot since they flew through San Francisco.  3-4 teams volunteered to help them with spare parts.

Usually, we each would have enough spare parts to build a small robot.  But all our teams have a second robot at home that’s playing in the Res-Q season.  We only brought our spare, spare pots.  So it took all of us to gather enough pieces to make a new robot.

We all headed back to the venue and raided everyone’s spare parts.  It felt like we were on a scavenger hunt locating everything from wires and controllers to PVC pipe and surgical tubing.

Some of our team worked with them as they created a new robot out of spare parts.  It’s a classic FIRST story.

If you look carefully, you’ll see the green channel that is our robot’s, Larry’s, spare parts.  We can’t wait to see their new robot on the competition field with us tomorrow! 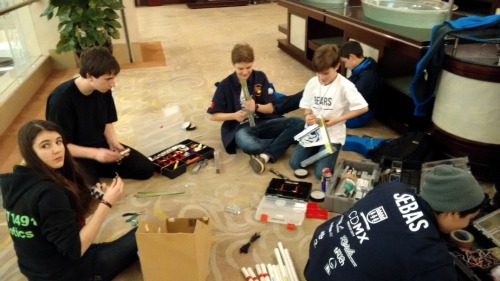