The Canadian FTC Championships were held in Edmonton on Feb. 8, 2015. We had been looking forward to playing with Canadian teams at an event.

We had a chance to get to know the teams and their robots during a full day of practice on Feb. 7.  It was a great chance for us to fine tune our autonomous programs and make some new friends.

Our first couple of matches went well, but our autonomous program was blocked. Then came the perfect match. We scored both balls in the centre goal in autonomous and then knocked out the kickstand. It was great to see that all the testing on Saturday paid off.

By the end of the qualifying rounds, we had a perfect record (no losses) and were the top ranked team. We invited 5009 Helios, the second ranked team to our alliance, and they accepted.

Unfortunately, they had mechanical issues and sat out for most of the semi-final matches.  It took three matches, but we won and went on to the finals. Fortunately, Helios had fixed their problems, went through re-inspection and were ready to play!

The first match of the finals was our high score for the day, 493 points. After winning the second match of the finals, we were Captain of the Winning Alliance, received the Rockwell Collins Innovate Award and had qualified for the FTC World Championship in St. Louis! 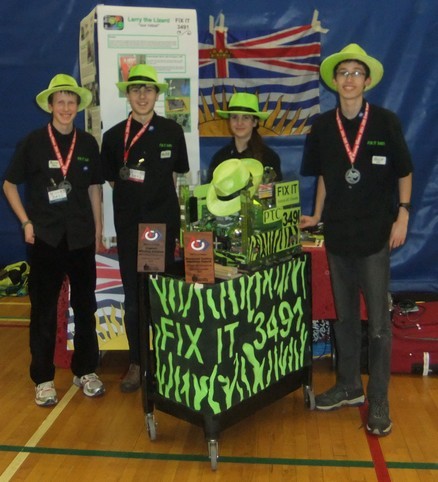 3491: Winning Alliance Captain and winners of the Innovate Award
Thanks to Phillip and his volunteers for a great event!